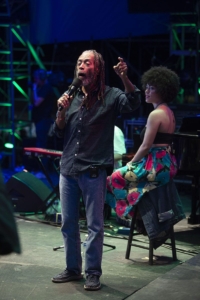 The Riviera Maya Jazz Festival, in its 16th edition, featured great local and international artists. The person in charge to open the festival was Kike Pat, “Un maya en el Jazz”, coming from a Mayan community in Quintana Roo, who was member of the band Aguamala, composed by Fernando Toussaint.

Bob Baldwin & Lori Williams captivated the audience with their jazz rhythms, while at the end of the night, the singer and songwriter Bebel Gilberto transported us directly to Brazil with her angelic voice and soft melodies.

The second night of concerts was adorned by Drew Tucker & The New Standard, who gave a unique touch to his presentation by adding instruments such as the xylophone and tuba; in addition to that they were accompanied by Sarah Reich, a tap dancer who added energy to the melodies. An innovative and very interesting proposal.

Cristina Morrison and the jazz fusion of Pako Rosas & PK BND kept cheering over 25,000 people that gathered that night to end the night on a high note, then the highly anticipated Norah Jones cheered up the audience with her incredible voice and talent that fitted perfectly with the starry sky and the soft crash of the waves that could be heard in the background.

The ones in charge of closing this edition were Pepe Hernandez, followed by Lalah Hathaway, the artist, composer and producer who fuses jazz with soft rock and the 10 Grammy awards winner Bobby McFerrin. Both tourists and locals were incredibly excited to listen to his worldwide famous hit song: “Don’t worry, be Happy ”.

This site is registered on wpml.org as a development site.