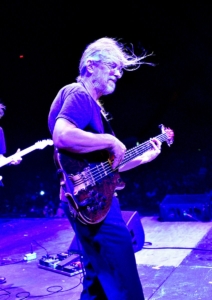 Accompanied by several of his friends, Paco Rosas was the performer incharge of opening the 14th edition, which according to the musician was “A big responsibility”. Then, Armando Montiel delighted us to the beat of uplifting Latin jazz rhythms. Fusioning funk, jazz and blues, Steve Gadd Band performed with their “Way Back Home” tour, along with Kevin Hays, Jimmy Johnson, Michael Landau and Walt Fawler.

Fiusha Funk Band was incharge of opening the second night of this great musical party, combining the smoothness of jazz, the taste of funk, the joy of hip-hop and the intensity of rock. With soft rhythms, Antonio Sánchez and Migration filled the atmosphere with magic and romanticism, followed up by Blood, Sweat & Tears —with Bo Bice, Dylan Elise, Jeff Lorber— who between cheers and applause made us all dance to their electrifying jazzy notes, and kept us asking for more songs.

The last night of the concerts began with the presentation of the famous band from Playa del Carmen ‘Aguamala’, a group composed by Fernando Toussaint, playing the drums. It was the turn of a jazz legend, Bill Evans, who made his musical debut at a Miles Davis concert; Evans mesmerized the audience by playing the saxophone. Coming from Sweden, Aron Mellergård (on drums), Henrik Linder (electric bass) and Jonah Nilsson (who captivated us with his privileged voice while playing the keyboard), better known as Dirty Loops, arrived on the shores of the Mexican Caribbean to end with the best energy and its funk-pop jazz another successful edition of the Riviera Maya Jazz Festival.

This site is registered on wpml.org as a development site.